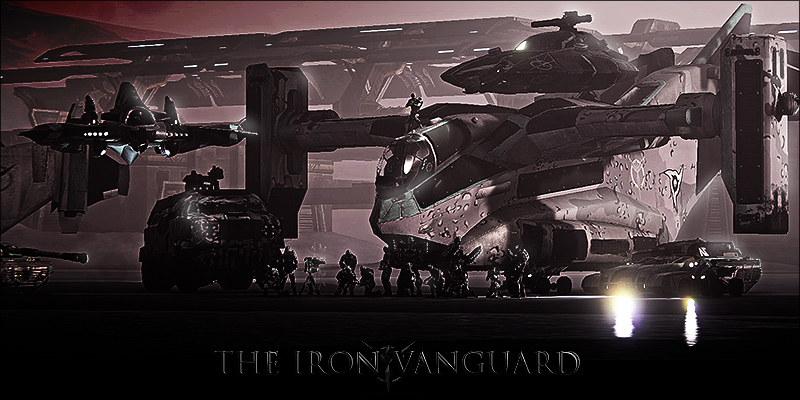 The Iron Vanguard [IVGD] is one of the first VS outfits on Lithcorp, currently numbering 96 members. We provide a home for players of all skill levels. For newcomers, casual players or grizzled veterans, the Iron Vanguard is a dependable ally in all your struggles. Those that want to learn will be taught, those that want to lead will be given a chance to do so, and those that simply want to pulverize all that stands in their way will be able to do so with a good number of friends at their side!

We use a Steam group to facilitate forum discussions when they are necessary, as well as to host events. If you are unfamiliar with events, they basically mean that, if you're online when a group event is starting, you will see a popup asking you to join in. This makes it easier for us to organize larger platoons.

We currently have a Mumble server. We may switch to TS or other services in the near future, due to hosting costs and limitations.

The details for the Steam group and the voice server are listed in the message of the day, which can be seen by members by viewing the outfit panel.

- You are able to speak English on a decent level. As we are in Europe, it is understandable that English isn't the main language of most players. The ability to communicate effectively for the purpose of the game is a must.

- You show good sportsmanship. Avoid drama. Be laid back, even if you are playing seriously.

- The ability to follow orders. I am fond of farming away during an endless conflict, but when a squad leader issues an order, follow it. Members are allowed to question orders, but should stick with what the leader proposes during the thickest fights. We expect players to stay within general proximity of the squad/platoon as much as possible.

Highly appreciated on top of the requirements: Being talkative is a good thing. Within the outfit, we are not just allies with an identical name tag, we are friends. Having initiative and making suggestions is also very welcome (so long as it doesn't lead to disobeying orders) Being willing to join and take part in the Steam group is also a plus. The link for it is listed in the outfit's message of the day.

1. Leaders - Crestfall and Shurriken. We handle recruitment and general organization.

2. Squad Leaders - DopplerSHIFT, Amenomade, Felicon, ViperWithARifle, Maelith, Caerus, Brabi - A SL's duty is, as the name implies, to organize squads. They are also capable of inviting new members. Accepted applicants should attempt to contact them if a leader is not on to invite them.

3. Vanguard's Finest - An honorary rank granted to our most dedicated members.

4. Members - after spending some time as a recruit and proving their ability to do well within the outfit, most players are promoted to the member rank.

5. Recruit - any new member starts out as a recruit. After proving their worth, they can ascend to one of the other ranks. Players that do not show an interest in taking part in the outfit's activities will not be kicked, but will remain at this rank indefinitely.

If The Iron Vanguard sounds like your kind of outfit, please complete the application form listed in our official thread[1], and we will attempt to contact you ingame as soon as possible if your application is accepted.