The Vigilia Mortis, or Death Watch. Is a branch of the highly honored Ordo Xenos, whose main purpose is to purge the galaxy of aliens. The Death Watch is a position that only a few chapters are sworn to raise soldiers to. If we ever find this so called Vanu race it will be exterminated in the name of the emperor. For now we are content on the battlefield against the Vanu sovereignty and the New Conglomerate.

We are quite new to the whole ps concept. Some members do have experience in ps1. What we all on the other hand do have experience with is enjoying ourselves while immersing down into pretty much whatever comes in handy at the time be it a joke or emperor forbids it heresy. We do however aim to become an outfit to be reckoned with, so expect us on the battlefield. Currently we are still deciding our approach towards warfare, we have read up on ps and we are quite aware that this game will favor the team able to devise the best strategy for the long run, and seeing other outfits opting for heavy tank warfare or aerial have made us think about it as well. Nothing is decided yet so if you want to be part of the deciding factor in our future please join up and jump right in chapter discussion.

This post is not complete will be expanded upon with pictures and such as well.

We’re an adult based Chapter made up of Warhammer and PC gaming fans. As with most gaming communities, we have our own rules that we follow to make our experience more fun and enjoyable for all members. The Chapter was founded with the upcoming Dark Millennium Online in mind, due to the news that DMO will be more single player based we have evolved ourselves to explore more areas of the Warhammer 40K gaming world and bring warhammer 40k to every game we play. With the dedication of our members we have be able to bring table top gaming to the digital platform, we also host daily Deathwatch RP and Space Hulk games - more change will soon befall the chapter, the site and all of its members. The Chapter is Imperium based only, we serve the God Emperor as his angels of death, Ecclesiarchy and his Hammer.

The Chapter is inspired by Deathwatch, we chose to go this route so members were free to join as their favorite Chapter, it also gives us the freedom to make up our own lore and allow our members to create their own stories without damaging official lore.

When applying to join our Chapter you will be asked to choose which Chapter you wish to be displayed as on your profile, upon being invited into our Chapter you will have this chapter banner put on your profile, as well as your company and Forum Rank. More on these ranks can be found in the ‘Chapter Information’ section. Your company is decided on which time-zone you are located in; this helps companies organize events such as chapter champion tournaments, events and it gives you a good idea of how big this community has become. A big thanks goes out to HAGNAR for these awesome banners, below you will see some examples: 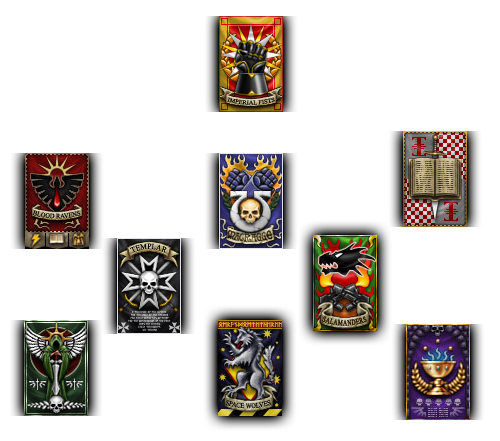 Vigilia Mortis is absolutely chock full of features, some of which you won't find together anywhere else:

All members applying to the Chapter must be at least 18 years old; players must be advised that this is an adult community with adult topics and conversations. We are a PC gaming only community, we do not accept applicants for console gaming.