Amp Stations are facilities made up of many different buildings, which surround one main capture-point room, which is protected by two shields, powered by Shield Generators in seperate buildings. Vehicles and aircraft can be spawned within this room. Defenders spawn in a room seperate from the capture-point building. Walls, towers, and walkways enclose the amp station, equipped with a variety of defensive turrets and jump-pads to help defenders travel quickly from place to place. Around the Amp Station, tank shields powered by generators within the amp station can be found, which block attackers from driving vehicles into the amp station unless they destroy the generators. Amp Stations contain 1 SCU, 2 Shield Generators, 1 capture point and 2 Tank Shields.

Capturing an Amp Station will drastically increase the amount of time any turret belonging to the capturer's faction can fire before overheating, making Amp Stations vital for defense. 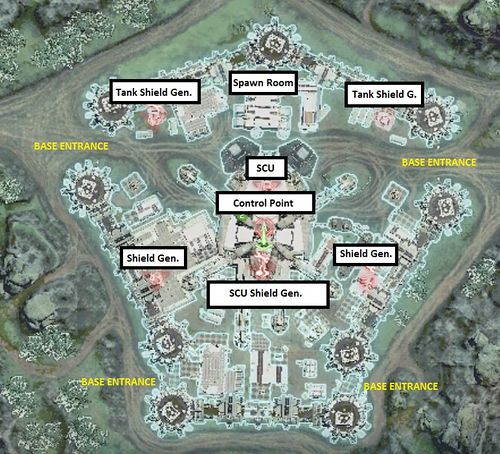 Note: Like most large facilities, Amp Stations usually have outlying bases which can be captured by attackers which can contain infantry, vehicle, or aircraft terminals, and can serve as an extra spawn location.

On both sides of the spawn room are tank shield generators which control the faction-colored tank shields on the northern base entrances. These must be destroyed if the attacking team wants to drive vehicles into the Amp Station.

Further down on the left and right are the shield generators which control the faction-colored shields blocking attackers from entering the main building. These must be destroyed if the attacking team wants to enter the main building and capture the base.

In the same room as the Control Point is the SCU Shield Generator, which controls the orange shield blocking attackers from entering the room containing the SCU and destroying it. This generator can be destroyed by the attacking team.

The SCU is located deep within the heart of the base; it controls the ability for defenders to spawn into the base, and can be destroyed by the attacking team.

Base entrances are also located on the southern part of the Amp Station, however they are too small for any vehicles to travel through.

The Amp Station is surrounded by a series of walls and towers (not labeled on image); the walls have anti-vehicle and anti-infantry Phalanx Turrets while the towers have anti-air Phalanx Turrets and Jump Pads, which are usable by the defending team only and can be used to quickly jump from tower to tower.