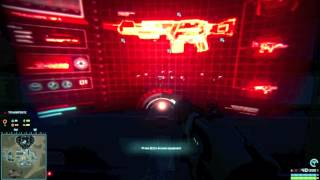 Equipment Terminals are hubs where an Empire and its infantry can change between the available classes for all factions: Infiltrator, Light Assault, Combat Medic, Engineer, Heavy Assault, and MAX units. These terminals can be found in every base, from small outposts to the larger Amp, Tech, and Bio-Lab territories. Since the beta and recent updates, terminals cannot heal a player, but they can resupply ammunition to a player -- including grenades, mines, and explosives. A soldier can also change their load-out and kits, including equipping new attachments on their weapons. One can also equip newly purchased weapons at this terminal.

Like their Vehicle Terminal counterparts, these terminals too can be hacked by the Infiltrator class or destroyed by sustained fire upon them -- and repaired by Engineers thereafter with their repair tools. This means that if an attacking force wishes to create a foothold in an enemy outpost, a first critical step can be hacking an equipment terminal to allow for the changing of weaponry, the resupply of ammunition, and so forth.

One faction cannot use another faction's terminal -- only once hacked by an Infiltrator can the faction use an enemy's terminal. If a soldier wishes to revert a hacked terminal back to their faction, they can counter-hack or destroy the hacked terminal and then repair it with a friendly faction Engineer. Terminals can be distinguished by the color of their monitors and the weapons demonstrated. For example, the Terran Republic terminal, as shown above in this article, is the traditional red with a T.R. weapon on it (presumably, a T1 Cycler or perhaps a TR LMG).